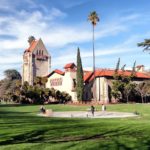 I was extremely fortunate to be a college student in the late 1970’s and early 1980’s. It was the heyday of freewheeling student life in the United States. After the campus protests and unrest of the 1960’s, students were allowed a great deal of freedom and autonomy once things settled down. Things differed from campus to campus, but when I arrived at the State University of New York at Stony Brook in 1978, it was quite the swinging place. The legal drinking age was 18 and there were frequent parties, especially on Thursday evening, as many campus residents lived close … END_OF_DOCUMENT_TOKEN_TO_BE_REPLACED